Spirometry is considered a method of assessing Lung Function by measuring the “useful” volume of air in a patient, in simple terms, it is a dynamic breathing test to look at how much air an individual can inhale and exhale and how fast this can be done. Spirometry  is used to help monitor and diagnose asthma and chronic obstructive pulmonary disease (COPD) as well as several other conditions which affect breathing, and may also be used to monitor the effect of any treatments for chronic lung conditions. 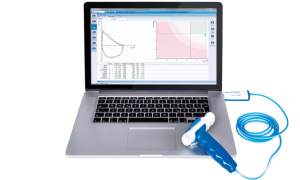 Spirometry systems are generally available as handheld devices and desktop-based devices which are generally more sophisticated and give more detailed results.

Some of the reasons why an individual may be referred for a spirometry test include:

Why is Spirometry used?

A Spirometry test may be performed to assess any signs or symptoms that may be caused by a chronic lung condition as it can help tell if narrowed or inflamed airways are obstructing your breathing. Conditions such as:

If a chronic lung condition has already been diagnosed, Spirometry may be used periodically to check the efficacy of medications and to monitor and control breathing problems. Spirometry may also be used before any planned surgery to check lung function is adequate for the rigours of an operation and is also being used within occupational health to screen for occupational-related lung conditions.

What does Spirometry involve? 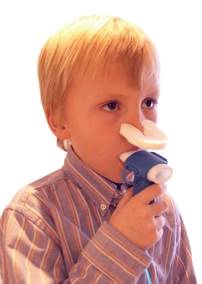 Spirometry manoeuvres should be performed with the subject in a sitting position, and the tests require the subject to breathe through a flow sensing device in several predetermined manoeuvres. The patient should use a nose clip to ensure air is blown through the mouthpiece.

The spirometry test involves 2 main parts, the first is a Relaxed or Slow Vital Capacity (SVC) test, which involves taking 3 tidal breaths followed by a big breathe in and then a long steady blow out until the subject’s lungs are empty.

The second part is Forced Vital Capacity (FVC) test, which involves taking 3 tidal breaths followed by a big breath in and a hard and fast blow out until the lungs are completely empty. Each part should be repeated 3 times to ensure consistent results.

The patient may then be asked to perform a reversibility test to test an inhaler or another form of medication to see if this improves the patient’s breathing.

What does Spirometry measure?

Slow Vital Capacity (SVC) – This is the amount of air the patient can blow out during the relaxed manoeuvre.

Forced expiratory volume (FEV) – This is how much air the subject can force from the lungs it is usually expressed as FEV1 the amount of air that can be exhaled in one second. This measurement helps assess the severity of breathing problems. Lower FEV-1 readings may indicate a more significant obstruction.

Forced vital capacity (FVC) – This is the largest amount of air that can be forcefully exhaled after a single deep breath. A lower than normal FVC reading may indicate restricted breathing.

By looking at the curves created by the software, it is possible to understand the problems the patient may have. They usually follow one of 3 patterns, normal, obstructive and restrictive.

Normal – Results are within a normal range based on the reference values for someone with the patients demographic.

Obstructive – When air flows out of the patient’s lungs slower than it should (low FEV1) an obstructive pattern is seen, this is caused by conditions which narrow the lungs airways such as asthma and COPD.

This can then be graded according to the severity with the help of a reversibility test.

Restrictive – When there is a reduction in the amount of air you can breathe in, but the speed in which you breathe out is preserved, a restrictive pattern is seen. Conditions such as Pulmonary Fibrosis which affect the lungs ability to expand and hold a normal amount of air could be the cause, although this can also be seen in obese patients.

Occasionally both obstructive and Restrictive patterns can be seen in patients with severe emphysema or cystic fibrosis.

Depending on the spirometry results patients may be sent for further lung function testing, such as lung volumes which could be done via Body Plethysmography, Helium Dilution or Nitrogen Washout, or a Diffusion test.

Are there any risks to Spirometry tests?

As some of the tests requires some exertion, it isn’t generally performed in subjects who have had a recent heart attack or some other heart condition. Rarely, the test may trigger severe breathing problems.

If you are interested in finding out more about our range of Spirometry and PFT products, why not drop our sales team a message at sales@lovemedical.com and one of our team will be happy to talk to you about how we can help!